The BiOMViS vaccine platform is based on three unique “technological pillars”:

2. Use of “precision engineering expression vectors” which allow the accumulation of large quantities of vaccine antigens in the OMV compartment. 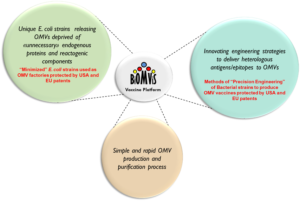 The wild type non-pathogenic E. coli strains are among the most utilized microorganisms for biotechnological applications, including the production of biological products for human health.

However, wild type strains are not particularly indicated as OMV-based vaccine factories in that they release low quantities of OMVs (usually less than 1 mg/Lt), and the released OMVs carry reactogenic lipopolysaccharide (LPS) and numerous unnecessary endogenous proteins.

BiOMViS’ E. coli strains carry selected modifications in the LPS biosynthetic pathway, that result in the synthesis of a penta-acylated lipid A. This chemical modification substantially reduces the OMV reactogenicity, making OMVs fully compatible with human applications, as judged by their safety profile (IL-6 release assay), comparable with OMV-based vaccines currently in the clinics.

By using a highly efficient gene editing strategy, a unique collection of strains has been generated, each strain releasing OMVs deprived of a growing number of proteins. The current BiOMViS’ workhorse strain, E. coli BL21Δ60, releases OMVs in which 60 endogenous proteins are missing.

The great advantage of using BiOMViS’ strains is twofold.

First, the reduced number of endogenous proteins in the vesicular compartment allows a substantially higher accumulation of recombinant antigens in the OMVs. 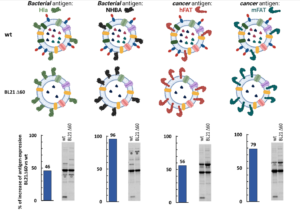 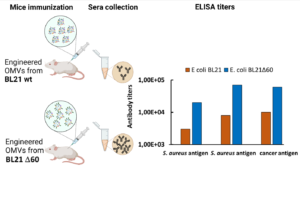 One amazing feature of the BiOMViS’ strains is that the inactivation of the endogenous protein genes has a beneficial effect on the amount of OMVs released in the culture supernatant. Under laboratory conditions, E. coli BL21Δ60 releases approximately 50 mg/Lt of OMVs, an amount that is 100-fold higher than what normally obtained from the wild type E. coli BL21 progenitor strain. 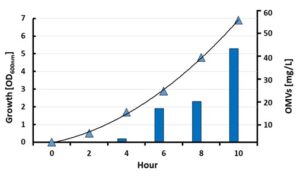 For delivering vaccine antigens to the OMVs, BiOMViS is proprietary of a unique technology which exploits the transport machinery of lipoproteins. The gene coding for the antigen of interest is inserted into one of the BiOMViS’ “precision engineering plasmid vectors”, which promote the expression of the vaccine antigen in a lipidated form. In so doing, the lipidated antigen accumulates at high yield on the OMVs membrane. The amount of vaccine antigen can easily reach a concentration of up to 30% of total OMV proteins.  High levels of antigen expression in OMVs guarantee potent antigen-specific immune responses with minute vaccine doses. Finally, antigen lipidation further increases OMV adjuvanticity. 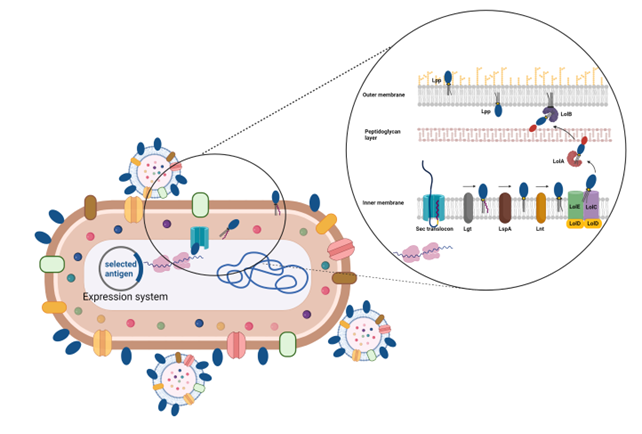 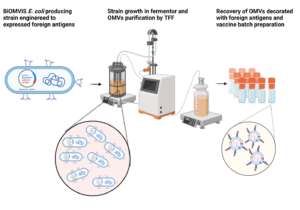